The sultan also reminded state reps to fully utilise the current sitting of the assembly to discuss and plan a clear course of action to help the people impacted by the Covid-19 pandemic.

Sultan of Johor, Sultan Ibrahim Iskandar today warned all assemblymen that he will not hesitate to dissolve the state assembly if they cannot work together and the political turmoil disrupts the governance of Johor.

The Johor Ruler also reminded all 56 elected state representatives that bad behaviour will not be tolerated as the state assembly is a place to discuss and make resolutions for the interest of the people.

“Do not contaminate my House with bad behaviour. This is an august House and not a House for caged monkeys. 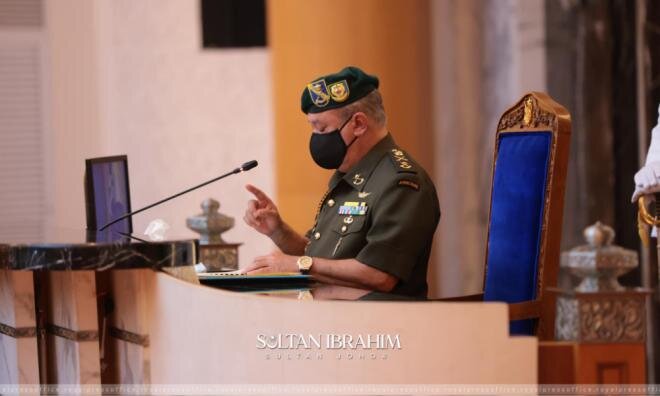 “I will not entertain any political games coming from assemblymen who continue to fight until it disrupts the government and state,” the 63-year-old monarch said in reopening the Johor state assembly in Kota Iskandar this morning.

The sultan also reminded state reps to fully utilise the current sitting of the assembly to discuss and plan a clear course of action to help the people impacted by the Covid-19 pandemic and rebuild Johor’s economy.

“There is no need to bring up unnecessary motions to the House. Don’t be selfish. The rakyat are suffering, going hungry, losing their jobs and some are even fighting for their lives because of Covid-19.

“This is not the time to fight (for political power); rather this is the time to unite and work together. Don’t look around to see what other politicians are up to, look at yourselves in the mirror instead,” he said.

Sultan Ibrahim had similarly threatened to dissolve the state assembly last year if there was an attempted power struggle.

Article 23(2) of the Johor state constitution states that the sultan has the power to dissolve the state assembly.

However, Article 7(1) of the constitution states that the ruler in exercising his functions must act on the advice of the state government.

Article 7(2)(b) states that the sultan may act in his discretion to withhold consent for the dissolution of the state assembly.

However, to suspend elections as mentioned by Sultan Ibrahim, there must be a localised emergency in the state; otherwise, elections must be held within 60 days of the Johor legislature being dissolved.

The sitting was supposed to resume on Sunday – a workday in Johor – but has instead been postponed to Aug 22.

It is expected to see the state government’s plans to restore the state’s economy, as well as to assist those affected by Covid-19 pandemic.

Johor is under the Perikatan Nasional (PN) ruling coalition and led by Hasni who is from Umno.

The PN government has 29 seats in the state assembly, while the Pakatan Harapan Opposition has 27 seats.

Where are your principles on gambling, PAS veteran asks party’s ministers

NEWS September 24, 2021
The process of completing an investigation paper over allegations against a well-known preacher has been disrupted.

Where are your principles on gambling, PAS veteran asks party’s ministers

DEBUNKED September 24, 2021
The court ruled that the statements were relevant to the family’s civil suit in the unlawful killing and should be handed over within 14 days.