The two men wanted in connection with the fatal shooting of a sub-inspector at a house in Changloon, Kedah, turned themselves in at the Jitra police station.

Mohd Hatta Bohari, 30 and Mohd Najib Jidin, 36, were arrested when they surrender themselves yesterday at 4pm and 6pm respectively.

The two men were believed to be on the run after Insp Abu Hashim Ismail, 54, was gunned down in Taman Sri Hosba near Napoh at around 10.25pm on Friday.

Earlier, police had raided the two men’s houses near the Malaysia-Thai border but they had fled.

In the fatal incident, Abu Hashim, who was attached to the Bukit Aman Anti-Vice, Gaming and Secret Society Department (D7), died on the spot after he was shot four times in the back.

He was having a conversation with a man in the porch area of the latter’s corner lot house when a gunman fired six gunshots at close range from outside the gate in the direction of the policeman, with four of the bullets hitting his back.

.The gunman then fled the scene towards a bushy area behind the house and subsequently disappeared into a nearby forest.

Police detained the 35-year-old man, believed to be the victim’s relative, to assist in investigations. They have obtained a remand order against him until Aug 25.

It is learned that Abu Hashim, who served at the Selangor police headquarters before being transferred to Bukit Aman, was on leave prior to the start of his retirement.

His remains were sent to the Sultanah Bahiyah Hospital for a post-mortem.

“There were three gunshot wounds that penetrated the victim’s body while another bullet entered his left chest.

“The cause of death is gunshot injury to the main vein of the victim’s chest,” Mior Farid said.

Meanwhile, Abu Hashim’s wife said her family was in Merbok, Sungai Petani, when she was informed of the devastating news.

The wife, who is also a policewoman, declined to elaborate.

Police investigating their colleague’s murder believe it may have links to the firearm smuggling case he was working on.

The sub-inspector detective had gone to the house, where a witness was staying, to source for information on a Bukit Kayu Hitam case classified under the Prevention of Crime Act (Poca).

State police chief Datuk Asri Yusoff said Abu Hashim was part of a team working on the case for the past two weeks, which had so far netted three suspects, believed to be involved in gangsterism and smuggling activity, including firearms.

The case is being investigated under Section 302 of the Penal Code for murder, which carries the mandatory death sentence upon conviction. 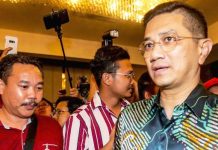 NEWS February 23, 2020
The day’s flurry of meetings and frenzy of activities.

ISSUES February 23, 2020
In a statement yesterday, Maszlee said Attorney-General Tommy Thomas was wrong to withdraw the cases and that he should toe the government's line on LTTE being a terrorist group.

NEWS February 23, 2020
A teenage girl here died in an attack believed to have been fuelled by jealousy.

NEWS February 23, 2020
Dr Mahathir is expected to have an audience with the Yang di-Pertuan Agong today as the rumour mill over the country’s political situation goes into overdrive.
© The True Net. All Rights Reserved